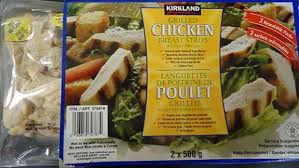 Kirkland Signature chicken breast strips sold at Costco stores across Canada are being recalled because of the risk of listeria contamination.

It warned consumers not to consume the chicken strips because of the risk of listeria, a food-borne bacteria which can cause serious illness in pregnant women, the elderly and people with compromised immune systems.

Anyone who bought the product should return it to the store where they bought it or throw it out, the CFIA said.

“Food contaminated with Listeria monocytogenes may not look or smell spoiled but can still make you sick. Symptoms can include vomiting, nausea, persistent fever, muscle aches, severe headache and neck stiffness,” the CFIA said on its website.

The chicken strips were sold in Costco stores in Ontario, Quebec, New Brunswick, Nova Scotia and Newfoundland and Labrador, but may also have been sold in other provinces.

No illnesses have been reported in connection with the product.  TheCFIA said it is investigating the cause of the contamination and there may be further recalls,